Every year, Dota 2 has their major multimillion-dollar tournament event called The International. For the first time last year, Team OG was the first team to win two TIs ever in the history of the esport. That said, this year’s major event will be massively different from the previous events and here’s why.

Due to COVID-19, last year’s TI in Sweden was delayed to this year. We didn’t even really get to finish the last Majors for the 2019-2020 DPC system. That said, the culmination of those events, now combined with the DPC of 2020-2021 makes this event a double-whammy of teams with pent-up energy to win this international event. The predictions of who would win TI10 last year are thrown completely out the window as we have a fresh new face of qualifying teams to take on this competition in October.

If you don’t follow the pattern of patches aligned with the current DPC system, that’s okay! I do, however, given my work with the hero builds and every year, the new patch released is about one month before TI which gives just enough time for pro-teams to get familiar with the patch, meta, strongest heroes and craft some strategies around that. However, what that means is that sometimes teams win through great gameplay but also through finding incredibly strong heroes and builds that completely catch teams off-guard. For TI9, OG caught everyone by surprise with their IO mid-lane build (when IO is typically a support hero). Presumably, a patch is still planned in the coming weeks but with TI being in October, that means the patch, strategies and meta will be much more mature and explored than in previous years.

As you can see, for the past 4 TIs, all patch changes were made about a month and change before the competition. Let’s hope this TI changes up the formula a bit and how that results in competition.

Nigma nor Team Liquid qualified for the event

This is a big one as both teams have traditionally attended the event. Nigma themselves were finalists at TI9 (under the Team Liquid banner) but were eliminated at TI. With Nigma out of the way, a lot of teams like Evil Geniuses and Team Secret may have a chance to secure the champion at TI this year. Especially Team Secret who have attended nearly every TI since inception. Though, fair to say, their performance this year has been a shadow of their previous years. Nevertheless, having both Nigma and Liquid out of the running for TI opens up a lot of doors of returning and new-coming competitors that crumbled under these teams’ drafting and strategic executions.

China and North American teams are the most favored to win

In previous years, Europe held the popular vote in terms of likelihood to win TI as they are the most performing throughout the DPC. For years, China has been in a slump and unable to come across as a relatively stellar team except for PSG.LGD. However, this year, it really looks like China has stepped up their game as over 4 teams (4 DPC-qualifying and 1 TI qualifier team) are competing for China. In fact, in terms of DPC points, they hold the most 1st to 2nd places, showing a stellar placement through this past DPC circuit.

For North America, this might be the year that fan-favorite Arteezy might actually win! Evil Geniuses have had a stellar year of performances and are among the highest-ranked in the DPC. With less European teams competing, this could be the year that the established EG brand win their second TI and a first for North America since TI5! 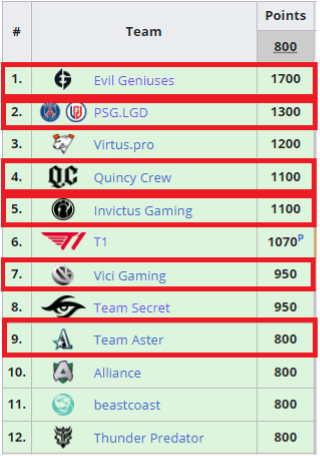 Out of the top 12 DPC-ranked teams 50% are both Chinese and American teams which is an incredible display of how much both regions have grown but also a display of how the new DPC-supporting leagues have helped diversify participation and competition across all regions.

It goes without saying that COVID-19 has really turned the screws on everyone’s plans and Dota 2 is no exception. From outright delaying The 2019 International to moving its location to Romania, a country that has only had a Dota 2 Minor event, it may be the first TI event with no audience depending on the Delta COVID variant plays out in the coming months. Nonetheless, just seeing the event actually going ahead with its plans after uncertainty sunk in back in 2020 is relieving to hear. No crowd may also be a factor on the psychology of the participants and performance in front of a cheering crowd has always had a strong psychological effect on the players throughout the event.

There is so much to say about the upcoming The International 10, however these are the five strongest points to mention until next time. For everything Dota, stick with SteelSeries and hang out on my Twitter, Twitch, and YouTube channel.

The world's fastest gaming keyboard with ultimate adjustability for every key in full size form.